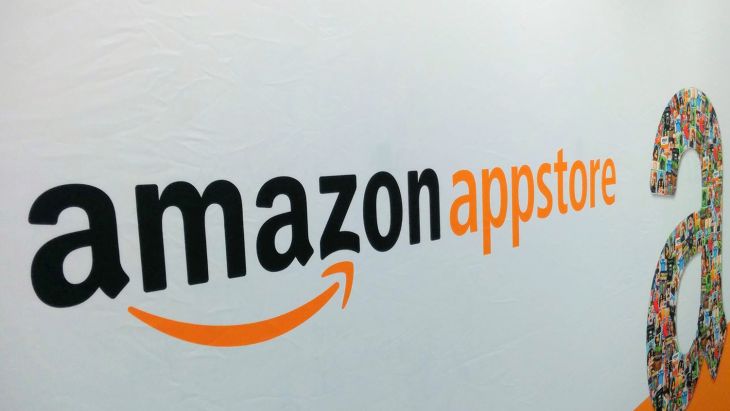 We spent the day at CodeNode for the Amazon App Summit.

In the last 6 months CodeNode has become a second home for Brightec (well, almost).

We enquired as to whether they’d let us set up our own special space; complete with coffee machine, bed and our collection of 1980s Roy of the Rovers annuals. They didn’t seem keen.

One of the main reasons we feel so at home at CodeNode is their usual warm welcome of free coffee, pastries and sandwiches. Also enticed along was a broad mix of 500 delegates who mingled downstairs looking at Amazon's latest hardware and a few stalls of selected partners showing off their products or initiatives.

We made a few notes through the day and thought we'd share them with you all.

The first talk (see the full programme here) was a helpful overview of the Amazon ecosystem. Here are a few headline stats:

Amazon are really pushing ahead in an encouraging way (especially for games developers). The user gets the app (and in-app purchases!) for free and the developer gets paid depending on how many minutes a user uses an app. It’s a loss leader for Amazon with the aim of encouraging users to hook into their ever-growing ecosystem, but it could prove to be a big disruptor for the market.

The next talk looked at TV apps. They'll certainly pose an interesting challenge for designers & developers - it’s not often you design for something that could end up on a 10foot screen.

There were some great tips offered though, such as; not using extremes of colour and only designing for 1080p - the Amazon Fire TV will downscale automatically for other screen sizes.

Oh and remember, make sure you turn off rotation, TV apps in portrait is a little awkward…

Next up, the ‘Two Phils’ of Curzon shared about their journey bringing the big screen (cinema) to Amazon FireTV.

They only have 650 films in their library, but each of them has been tastefully hand picked. They're also a traditional company (80years and still going) but, aspire to be a disruptor within their market - a compelling combination.

They are seeing a super high retention rate on their app which they attribute to a strong UI/UX design and some well crafted metadata. But, their biggest win is that the FireTV platform has grown so quickly as so well.

From Curzon we skipped into the next session and the fascinating world of Alexa Voice Service (Amazon Echo).

Amazon are obviously investing heavily in this field and Alexa is certainly impressive with vast potential.

Developers are going to have a lot of fun in the future with this and building Alexa skills in AWS looks really slick using the Alexa Skills Kit.

We then moved onto another company story. Who knew Skycanner have now been around for 12 years?! They have grown, a lot!

Alongside their story of the difficulties of handling flight data, Skyscanner gave some great insight into how to design a system for Alexa. It’s a new challenge for user experience design, speech isn’t usually a medium we have to design for. Usually users are typing in a destination or an airport code, speech obviously allows for a broad range of locally known names, different languages and all sorts.

Perhaps their best tip was simply to use a whiteboard to think through real conversations that you would have to complete your user journey.

For instance, Skyscanner thought about conversations that you would have with a travel rep to make sure they were inside the user's head.

The demo was a little flaky (yet still impressive) and SkyScanner hope to get this public by the end of the year. It certainly looks ambitious, but they are the kind of company who can pull it off.

Gaming app examples unsuprisingly dominated the monetization talk. However, there were still some great principles divulged around building your brand.

Here’s a few key lessons we picked up:

It looks massive for games, essentially you upload your artwork to Amazon, set up a listing and they sell and print for you. No costs and Amazon take a percentage of sales for example, on a $19.99 t-shirt the developer gets ~$8-9. Considering there is no print or infrastructure cost that works out really well.

Perhaps the best part of the day was the session focusing on the 'best practices of top-earning mobile apps'.

The primary thrust of the talk was that earning revenue outside of your app is more approachable than ever. Lots of brands are doing lots to target monetisation outside of apps.

Wordpress is a great example with template sales that aren’t even made by Wordpress itself.

Some key stats and info that we found illuminating:

It’s often interesting attending events put on by large corporates as it’s hard to work out where you 'fit in'.

However, it was great to hear Iain Gavin from Amazon ask (more than once) for feedback.

Amazon are clearly catching up with developer relations; lots of videos, meetups and events are being scheduled and highlighted to further their relationships with those building apps for their platforms.

In conclusion, a great day with some fascinating learning points. We left inspired that the Amazon app store is definitely a contender in the app store landscape and that there are some great new platforms out there that we need to explore further.