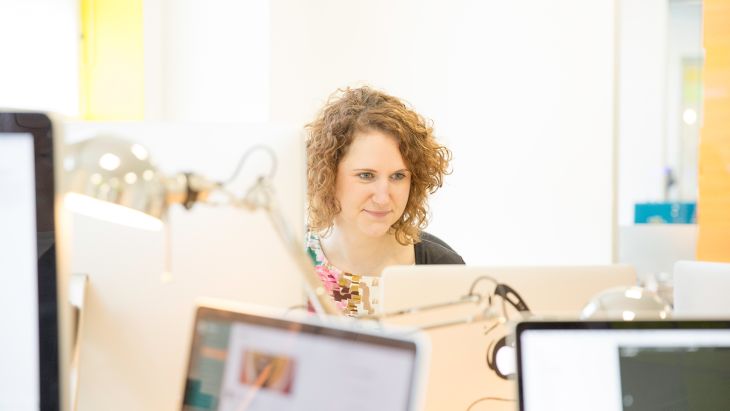 When we originally introduced our team to the Daily Scrum, they took to the daily discussions pretty easily as it wasn’t a huge shift from regular project Stand Ups. But in true Brightec style, we’re constantly striving to improve ourselves and our processes. We aren’t afraid to say when something isn’t working as well as it could.

The daily call to Scrum

If you have the misfortune to walk past our office at approximately 9.29am, you may see a window pane or two shudder as I fulfil my Scrum Master role and screech 'SCRUUUUUUUUUUUM' at the top of my lungs.

It has become a bit of a game, how long can I shout without having to breathe in? Somehow the call worked, we would all congregate in the kitchen, pass round the dice as a token to speak and outline our tasks for the day, then leave feeling virtuous. The scrum wasn’t empty by any means, we would often decide a few of us would stay behind and talk in a little more detail about a task or a project, but our focus had wandered.

It shouldn’t be quick to the detriment of efficiency.

The Daily Scrum should help to set the context for the work you have in mind for the day ahead. It should give everyone in the team a clear understanding of what work is being done on a project. There should be a sense that that task is being led by one person but the responsibility for it being ‘done’ is shared among the team. If the same person is still working on that task three days later (assuming it was estimated as a small task), it’s a signal for someone else in the team to say ‘Hey, let’s look at that together and work out a quicker solution’.

We admit, we let it slip

Our Scrum was sliding towards just meeting to tell each other what project we were working on (something we already knew from Bob the Overview Board - more about that later). It wasn’t detailed enough. We were trying to be quick and had forgotten that by their nature, a Scrum is quick. We needed to shift focus back to detail.

You might have picked up by now that most good things at Brightec start with a stack of post-it notes and a sharpie. So dice throwing is out (there just isn’t enough hand eye coordination to manage juggling a post-it, a pen and a dice) and post-its are in…

The vast majority of teams conduct the daily scrum meeting by having each person answer the three questions in order.

For various reasons, we just didn’t find that this worked well for us, although we recognised that asking a question had value.

Instead, to encourage the team to be more specific, each member of the team was asked to arrive to every Scrum armed with a post-it note listing the tasks (the task reference number, title and task size) they intended to work on that day.

We now start the Scrum meaningfully, focused on the specifics of our task for the day. And we’re still done within 10 minutes.

Each member of our team has a slightly different preference to their working hours which means we’ll trickle into the office between 8am and 9.30am. Recognising this doesn’t give everyone the time they need to get their heads in the game, we pushed the 9.30am start back to 10am. Now everyone has time to get in, assess their to do list, adjust priorities, write their post-it and arrive at the Scrum dedicated to their jobs for the day. Without impacting on their morning routine outside of work.

We’re trying to let our ‘oddities’ go and not spend too much time making sure the post-its are arranged symmetrically on the wall (no, that doesn’t mean it is ok to slap it up sideways). The post-its stay on the wall until the next Daily Scrum.

Personally, I like seeing the reminder throughout the day of what I signed up to that morning. Previously I walked out of the scrum, my head full of ‘I need to catch up with that person’, ‘I need to look at that project’ and my own list might get forgotten. Now, when I wander to the kitchen for a cup of tea or sit down for lunch with the team, I see my post-it and my brain refreshes back to what I wanted to get done today.

Writing the post it is also a nice task to do first thing. I love a list but my to-do lists are often pages long, and I have different headers for different lists. Now I prioritise each morning and select between 3-5 main tasks from the multiple lists, ones that I know I can and will do that day.

A post-it is not everything

We wouldn’t be a very Agile company if our internal processes weren’t flexible.

During the Daily Scrum the following day, we each take down yesterday’s list and replace it with the focus points for the new day. Whilst we aim for detail and accuracy when presenting our Scrum Post-It, all of us know that there is always a chance of something happening during the day that will shift our expected priorities.

No one on the team is afraid to admit they didn’t get to a task they had ‘committed’ to the day before. In this case, that team member will write up the same task two days in a row and share the reasons with the team. It’s a positive to share; either asking for help, sharing a resolved issue on another project which came first, or simply ‘I thought I could do more than I could’. There is no weakness in not completing your post-it.

As mentioned earlier in this blog, if you’re wondering where our day-to-day priorities come from, Bob is your answer but I’ll let Josh do the honours and introduce Bob the Overview Board in another post.