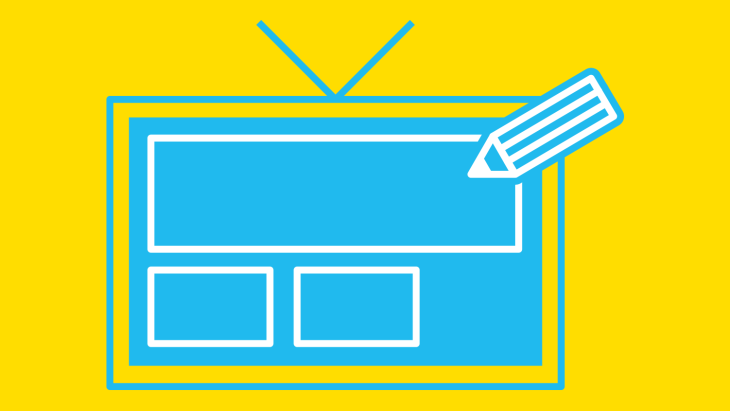 Apple TV provides a great opportunity for companies to reframe their content and capture new audiences.

The UI of Apple TV offers designers a new challenge but it’s the overall user experience and context that is most exciting.

The 10 foot UI (as most users will be at least 10 feet away from the device) means that apps can be used not just by individuals but by couples, families and friends.

The users are perhaps also in a more relaxed or casual place when using the apps (when did you last watch TV standing up?).

Apple’s design guidelines are (as you would expect) in depth and offer technical guidance for designing for tvOS.

They encourage designers to consider the distance that users will be from the TV, to utilise the large screen space as an opportunity to present captivating imagery and also consider that the user is connected to the device through a small remote instead of a keyboard, mouse or touch screen.

We took at look at a few apps to see how companies are utilising this new format, and picked four companies (listed in no particular order below) that are using the new UX & UI opportunities to great effect.

For users that have their Apple TV setup in the kitchen or in an open plan living room / kitchen setting this is a very useful app.

Their smartphone and tablet app is already fantastic and popular, but the TV app takes it one step further.

The size of the TV screen means that the device can be much further away from the hazardous cooking area (has anyone else ever drowned their iPhone in chopped tomatoes?).

It is also probably true that the user, when needing to pause or scroll through instructions, would prefer to be touching a small remote with dirty hands rather than an expensive tablet screen or laptop keyboard.

AirBnB offer a simple yet inspiring app that you could easily imagine working well in a group setting e.g. with a partner or a group of friends.

The app offers curated images by city and also by theme, such as; Writers’ Houses.

At the time of writing you're not yet able to book through the TV app, but it gives the user a good feel for the cities and the type of properties available (and can of course be booked via their other outlets).

AirBnB also offer some interesting approaches to the challenge of navigation and arranging content within the app.

With the tvOS, navigation is carried out through indirect touch or swipe on the remote control. If the user taps or swipes right then the navigation moves right.

For content such as photographs, Apple use the iOS method of direct swiping. If the user swipes from right to left the photo moves to the left.

The AirBnB app uses the indirect tapping for their top navigation and iOS style swiping for the photos within properties. They also use the iOS swipe to move between properties.

Whether this is content or navigation is contentious but overall the app is very usable, appealing and particularly engaging.

Not On The High Street

Not On The High Street is another great app for groups of users or an individual looking for presents for friends.

Apple guidelines encourage designers to layer icons and images to create a parallax effect. As users are only connected to the device through the remote, this parallax effect increases the feeling of connectivity between the user and the device.

Small movements on the control pad will create subtle changes in the icon and images. This is something that NOTHS does really well with its icon and product images and creates a delightful user experience.

Another challenge of presenting content on a TV is presenting text that is readable from a distance. Apple advise to use text and text input as little as possible. For product description NOTHS have presented heavy product descriptions as an overlay to the product page itself. The layout is visually pleasing and the text is clear and readable.

The final strength of NOTHS is that the TV app can sync up to other devices to complete transactions. This is more convenient when entering personal details and card numbers.

Finally, Touchpress. A beautiful and intriguing app that aims to bring classical music into the living room in a new and exciting way.

Recently visited by Tim Cook himself, this app is worth checking out just for the sheer brilliance in the idea. Whereas the majority of early TV apps will inevitably be serving up some kind of video content to their users, this app has gone much further and delivers simultaneous videos that a user can jump between to get different perspectives on the piece of classical music being played.

The UX for the menu is strong with simple cards and content previews, but once the user is within an actual piece the magic happens with a user being able to simultaneously watch the performance, the score and a heat map or the orchestra (or a NoteFall visualisation for piano pieces).

Whether you are into classical music or not this company has to be respected for the thought and effort they have put into creating something new and innovative for this platform.

This article was originally written for Brightec by Ed Jenkins