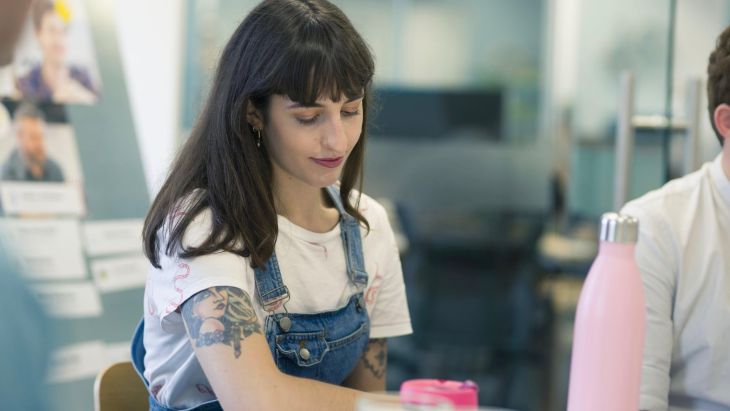 So you’ve had a great idea for an app. Nice! But wait, what on earth is an API? Is UX the same as UI? How many acronyms do I need to remember? Don’t worry, we’ve got you covered with this helpful guide to some of the (many!) terms you might come across in your journey to creating your app.

This is the collection, measurement and reporting of statistics for your app. e.g. how many users it has. To learn more about analytics tools, check out our blog here.

API stands for Application Programming Interface. APIs provide a set of fixed rules and specifications that define interactions between software components - e.g. libraries of app colours or fonts. There are usually multiple APIs in one app. To read about creating an API, check out Alistair’s blog series here.

The behind the scenes part of your app. It consists of a server, an application and a database that all have to communicate so the frontend functions work

The beta version of an app usually contains all the features planned for release, and undergoes ‘beta testing’ which is before the general release of the app.

Bugs are any sort of unintended behaviour in your mobile app - e.g. if tapping on a button doesn’t trigger the expected action.

Forking is when developers split the source code into different branches - this leads to the development of different versions of a programme. The central place where data is stored is called a repository.

The bit of the app the user sees, eg. the screen. The user’s actions on the frontend interact with the data hidden in the backend via the API.

Git is a version control system for developers to manage collaborative projects. Code files are stored in a repository and tracked to monitor changes.

JSON stands for JavaScript Object Notation. It is a lightweight format originally derived from JavaScript that is easy for humans to read and write, and for machines to parse and generate. It is for storing and transporting data.

A Native app is one that is designed specifically for an iOS or Android device, often using native components that already exist on the phone (e.g. fonts and button styles). Because the app is built on a specific platform which means the developer has access to all the support and functionality of its operating system; this means as much as possible can be achieved when developing the app.

OS stands for operating system - i.e. the system that the device is managed by (iOS/Android/Browser).

The type of mobile device we are building an app for. Eg. iPad, iPhone, Android Tablet, Android Phone.

A push notification is a short message that an app sends to its user to notify them of an activity within an app (even if the app isn’t open) and will be visible on the home screen of the user’s device.

QA stands for Quality Assurance. This is the process of monitoring and evaluation which is carried out to ensure the app matches the designs and agreed specifications/requirements, e.g. before a new version of an app is released.

Sketch is the programme that many UI designers use to create visual designs for apps. It is particularly helpful as it allows designers to export components in a format that developers can work with. It is also used for wireframing. To learn more about Sketch and its features, check out our other blog posts including this one.

UI stands for User Interface. This is how an app visually looks - aspects like the layout of the screen, the buttons, the text and images. UI designers create visual designs based on the client’s needs and hand them over to developers to make. Screens have to include different versions, such as if there is an error, or a notification.

A user journey is the way a user gets from one point in the app to another. During UX research, creating user journeys is important as it allows the designer to recognise any ‘pain points’ that the user may have, and can make it easier to cut down unnecessary steps or make a screen more clear.

User testing is the process of observing people using your app to see how intuitive it is, and if there are any areas to work on (or indeed, which areas are already great!). There are many different methods but, generally speaking, the format is having an Interviewer to ask an individual User questions about how they are interacting with the app. Sometimes if the setup is possible, there will be a team of observers watching the interaction remotely via a videolink and taking notes; if not, the Interviewer will. There will be several consecutive Users in one session, which allows the user testers to look for common patterns, for example if 50% of the users were unable to find the product they were looking for on an app because the search functionality was unclear. User testing is invaluable because it offers the client a chance to watch a potential customer interacting with their product which often throws up unexpected issues. To find out more, check out this blog post by Andy.

UX stands for User Experience. This is, simply put, the way a user ‘experiences’ interacting with an app - i.e. the way it makes them feel. Is it a seamless experience, with all the elements in places they expect them to be and minimal taps needed to complete their task, or do they have to spend time figuring out what the buttons do and have to pass through several screens to get to the end? A good user experience is one where the user can intuit how they should complete an action without the app having to explain it. UX designers carry out research prior to the UI design, creating ‘personas’ (hypothetical potential users/customers), user journeys and create simple wireframes to visualise the basic layout and structure of the app.

For any software development project, there will be several versions of the final product. Instead of saving over these when there are updates and potentially losing something you might want to go back to, all the different versions of the source code are stored. Version control systems are effectively a database of files that can back them up or restore them, as well as tracking changes and ownership.

Wireframes are the first visualisations of how an app will look. Often drawn on paper but sometimes made in programmes such as Sketch or Adobe Xd, wireframes help to show the layout of elements within an app as well as how each screen will flow to the next. It’s a rough visual representation of what you will see on a screen without textures, colours, typography or graphics.

Zeplin is a programme that allows collaboration between UI designers and developers, as well as a platform to showcase designs to clients. Designers upload screens directly from Sketch and can add comments for developers. Similarly, developers - or indeed the clients themselves - are also able to add comments to clarify certain things or ask questions.