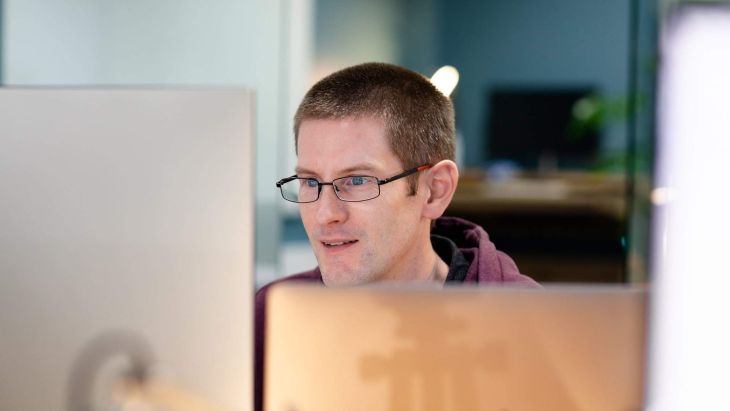 Meet our Technical Director Chris. He'll hate that we've written an entire blog about him.

He’d eat mince pies all year round if they were available and prefers instant coffee to the ‘real stuff’, but if you cover something in sugar, Chris will most likely eat it.

In a team full of caffeine snobbery, coffee is perhaps the only topic on which the Brightec team would question Chris’s decision...

Arguably the most patient member of the Brightec team, Chris often remains impartial; quietly gathering all the facts before he makes a considered decision. He’s always willing to listen and help others to understand a new technology, or work towards a resolution. This balance makes him a well respected member of the team, and well placed as our Technical Director. Just don’t walk slowly in front of him...

The question has been raised as to whether or not Chris is actually human; based on his ability to always remain focused and solve complex conundrums. He’s driven by momentum on projects and enjoys great satisfaction through his hard work. But, we’re confident he is at least 50% jelly bean.

For a man with such high intelligence and incredible ability to resolve anything, he is however, impressively useless at retrospectives.

From Digger to Developer

Deciding against pursuing his childhood dream to be a digger driver, Chris studied Computing and Maths at Brighton university. It was in Brighton that he met his wife, whom he now has two children with. They share their home with a room full of yarn, in honour of his wife’s crochet addiction.

Chris previously worked for Andy at another company, before he was persuaded to join the Bright side 8 years ago; moving from an IT Role to become a Drupal developer. At Brightec, Chris quickly learnt Android app development; controversial for a man who has quite an attachment to his iPhone. We guess Chris just really likes working for Andy.

Chris enjoys an annual snowboarding holiday, never to be mistaken for Skiing. He’s also a keen rock climber. We knew there had to be some outlet for the steady supply of sweets which keep Chris firing on all cylinders throughout the working day.

Chris is known for his aversions to vegetables so you won’t catch him eating anything green; unless his wife has hidden them in their dinner (purely to trick the kids, of course.) Seafood is also a big no no, unless battered, fried and surrounded by chips.

Whilst his dry sense of humour and quick wit will keep you on your toes, Chris hates talking about himself and will avoid having his photo taken at all costs… someone must have forgotten to mention Brightec’s love of photoshoots before he accepted the job. He poses the simple question; ‘why would someone want to stand still and smile?’

Given the option to develop his own app with an unlimited budget, Chris says he’s still thinking about it. Although he likes the idea of a facial recognition app which would edit him out of any photo opportunity.

Now you know Chris is more comfortable with sharing his knowledge than talking about himself, you can find about more about his work at Brightec here.