What is the best way to run user tests remotely? 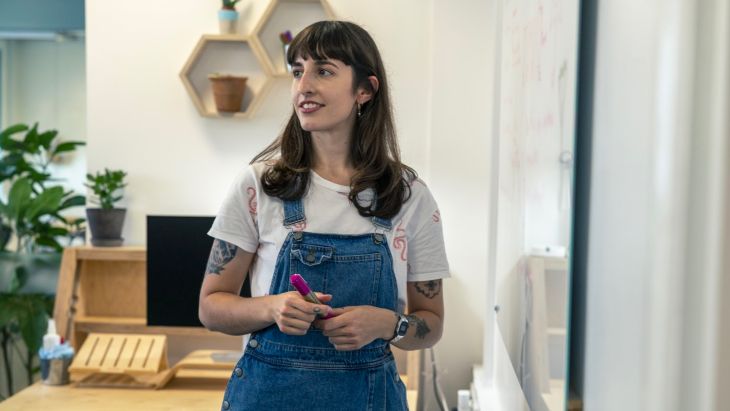 In light of Covid restrictions, we’ve had to completely reassess how to run user tests to be both safe and effective. Here’s what we’ve discovered so far

Back in the good old pre-pandemic days, our user testing would be held in person at our office in Brighton. The user would be set up with a device in one room with the interviewer, and this would be shown via video feed to the observers in a room on the other end of the office to make notes.

Going the extra mile (or two, or three…)

Is it possible to safely run in-person user tests during a pandemic? The short answer is no. Is it possible to effectively run remote user tests during a pandemic? The short answer is yes. As user-centred designers, we know that these sessions are an essential part of any successful project so there was no chance of us giving up until we’d found something that was going to work to collect the feedback that’s so important to us. Faced with the (daunting) task of overhauling everything we know about running successful user tests without physically being with our colleagues and users, we carefully researched the various options. We came across Lookback, a tool that we used once upon a time - and that has vastly improved since then.

Lookback is a smart little tool that has changed the way we approach user testing, probably forever. It has two options for running user tests - SelfTest (unmoderated tests that users can take at any time) and Lookback Live. We use Lookback Live to run moderated user tests and have found it to be a really great way of testing products. This can be done either using developed apps from the app store which users download onto their phone, or via Invision prototypes. Users have to download the free partner app to allow Lookback to view their device’s screen.

Through Lookback, the user and interviewer are connected via video call. The interviewer is able to talk through how to use the product, suggest follow simple tasks for the tester to follow and see the user’s screen to observe. There is also a virtual observation room with two channels for observers within our team to take notes as they watch the user’s screen, or to flag things in real time to the interviewer.

The results are in

The sessions are also recorded, providing the opportunity to rewatch, and send to the client for them to watch. All comments are time stamped so you can easily jump between them and create highlights to collate similar comments. We found that we had to devise a system of coding the comments with emojis to make it easier to identify positive/negative/neutral - we’d love it if Lookback could consider developing that in the future.

There is something about in-person user tests that you simply can’t recreate in a remote session, but we’ve all had to adapt and find new ways to work and Lookback has served us well so far.

We’ve found the best way to use Lookback is with real apps rather than prototypes.; we found it a little clunky and distracting for users compared to using a fully developed app so there is definitely scope for improvement in this area .

Onboarding users to Lookback is also not the most straightforward thing in the world and there have been some teething issues with getting set up. They also have to be equipped with a smartphone, laptop and headset for it to run smoothly. Despite this, Lookback has proven to be a worthy contender in the field of remote user testing. The fact that users can be recruited from any location rather than limited to being local enough to pop into the office, makes the prospect of continuing remote user testing post-pandemic more than a little appealing.

It also saves a lot of Post-its.

For further reading about user testing, check out Jotham’s blog on why user feedback is so important.

Sign up here to be the first to hear about user testing opportunites.

We love to learn by studying and sharing the knowledge of our business and the projects we work on. Click here to read more about User Testing at Brightec.