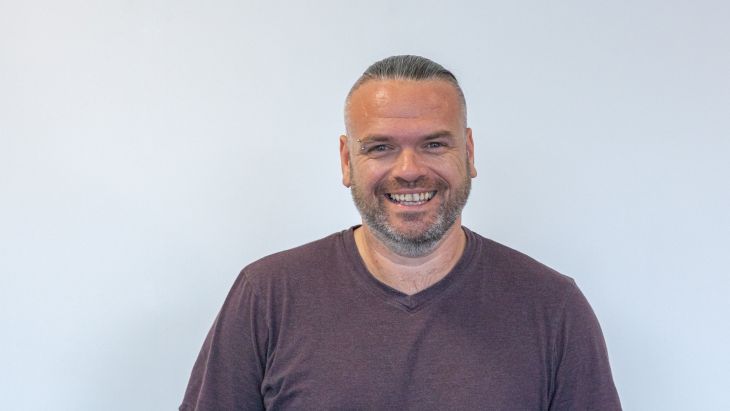 With a career chronicle more varied than most and a love of Sci-fi, we’re honoured to have kept Steve grounded on planet Brightec since 2015

A man of many talents and a very short attention span, our Senior Developer Steve has a brilliant ability to relate to anyone; drawing them into conversation with his contagious enthusiasm for all things creative.

Rarely sighted out of shorts and t-shirt, but somehow always reliably prepared with an umbrella (he loves a weather app), Steve has a natural ability to accurately understand how someone feels. A skill he uses to ensure team members feel supported and understood.

There is rarely a problem that Steve can’t solve when armed with a bag of liquorice allsorts. Despite ‘argh’s’ at the keyboard when coding, he is always willing to respond to requests and changes… no doubt excited by a shiny new opportunity to explore in his determination to accomplish a task. His willingness to try new things and decode logic means Steve can quickly connect dots that other people might overlook.

Although perhaps the most sociable member of the Brightec team, Steve has always enjoyed his own company. In fact, his discovery of technology was the product of his dad bribing him to leave the house with £30 for a train ticket to London. (Thankfully able to follow instructions and product requirements more closely now) Steve ended up in the local computer shop, and purchased a new mouse for his BBC micro instead.

While other Brightecoids spent their childhoods swimming in lakes, playing computer games and horse riding, Steve visited this same computer shop every day after school fascinated by the array of machines on display.

“I can’t teach him. The boy has no patience.”

With a lot of passion and not a lot of patience, Steve left school at 16 feeling eager to get into the world of work. Ironically, he now has a hunger for knowledge and loves learning.

After a very short stint in retail, Steve decided to return to education, intending to study Software Development. However, following advice given by the college he enrolled with, he ended up on a Microelectronics course instead.

Whilst he enjoys trying his hand at anything and everything, there are very few things that capture Steve’s attention more permanently than the initial phase of excitement. Interspersed between electrical jobs fixing arcade games and carrying out tech support, he started to explore web design, digital art and programming.

So, with all his usual excited enthusiasm, Steve set up his own business doing multimedia artwork for Dr Who related film making and special effects. No wonder this ultra-creative developer is our secret weapon for app animations. However, this entrepreneurial flurry helped him quickly decide he liked being creative more than he liked running a business so he found himself a job working for someone else again. This time as a life coach, which set him up quite handily for life at Brightec.

Without any neat lead on what to do next, Steve hit a high note with his hobbies and decided to enroll at Music College. Through a bizarre twist of events, he became involved in theatrics and was once invited to compère at a street party, under the guise of Darth Vader. He has even played the pantomime Dame. Oh no he didn’t? Those days are behind him now…

Steve’s first encounter with Brightec was as a software tester for another company, testing a project Brightec had developed for them. In a seemingly common occurrence, after a few coffees with Andy, Steve accepted a Developer role at Brightec.

This Senior Developer is anything but idle, which is ironic, as his most treasured side projects is his punk band, Idle Bones. When not playing bass, guitar, singing or teaching himself to play piano and drums, Steve likes to spend his free time (we doubt he has much!) playing in Virtual Reality. He’s also an avid fan of Dr Who and Star Wars.

Amongst a fulltime job, his band, solo performances, film making and voice overs, you wouldn’t be a fool to imagine Steve would want to create a time pausing machine. (Suddenly we understand why we can always rely on Steve having used up all of his holiday allowance within the first seven months of the year! We’d want to escape to Canada for a few weeks every year if our lives were this busy too.) But this musically minded man would use the opportunity of unlimited time, technology and money to build an app that interacts with his brainwaves to create multi-track recordings from the music in his head.

Click here for more about Steve and his creative approaches to work at Brightec.

Drum roll please. Our Head of Product quite likely never feels full, but Jotham is overflowing with ideas to turn your project visions into accessible digital products that people will love to use.