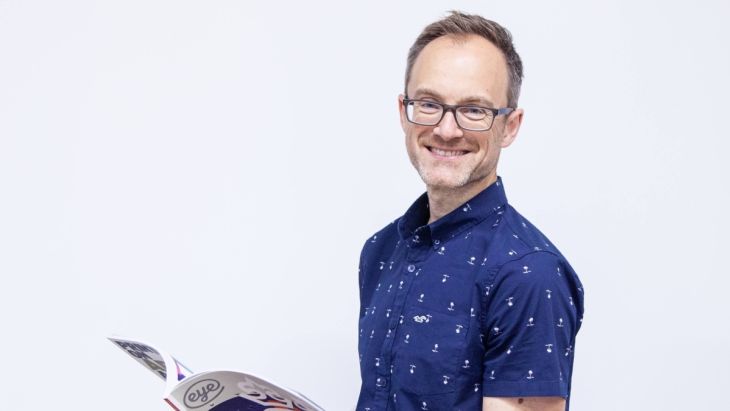 His Uncle invented the Black+Decker Jigsaw; a claim to fame that has us in pieces. But it's no puzzle where our Head of Design gets his creativity from…

James has a rare insight, having experienced Brightec life as both a client and now one of the internal team. From the client side he said he liked our company culture… and thankfully still does.

By nature, he enjoys working hard and gains momentum with every accomplishment he makes. He is enthralled by the process of learning, rather than the outcome; making every project its own mini adventure. Intrigued by the talents of others, James has a natural ability to draw out the best in others making him perfectly placed to nurture and refine ideas from both our team and our clients.

James is politely pedantic, creative, innovative and rather unrelenting. Much like his sporting hobbies; James is all about endurance. Having cycled around the Isle of Wight in 2021 he is now planning to do Coast to Coast, alongside his more casual 100 km weekend adventures.

He loves music and happily named one of his favourite lockdown projects to be restocking his vinyl collection… by stealing Jazz vinyls from his Dad’s garage. Bet that’s left him feeling a bit blue.

James wanted to be a tractor driver when he grew up, but, aged 4, realised his driving was pretty sketchy, thus steam-rollering his way towards a career in design instead.

After completing a foundation art degree, James didn’t fancy setting up in a full time job so he went looking for a change of altitude; working at Camp America in the Appalachian mountains before heading to Australia, Thailand, New Zealand and all manner of exotic places on his way back to the UK.

With a few air miles under his cap, James enrolled at UWE Bristol to study Graphic Design. After which, he returned to Brighton having landed a job as a Junior Designer. From his first job, James moved to a fancy design agency in London for a few years before he landed a role at Kings Education in Brighton, going straight into two major rebrands, building the school’s vision.

Being back in Sussex for his first job enabled James to reconnect with old friends from school, and is also where he met his now wife. Who inadvertently lit the path to his latest career turn (joining Brightec as Head of Design) by introducing him to Andy. In the early Brightec days, the team built the website for James’ side line project; a Photography and Design business. In the following years of friendship and occasional cross over in professional settings a conversation brewed between the two about growing the design aspect and vision for UX/UI at Brightec. Culminating in him joining the Brightec team in 2021.

James enjoys typography and the correct usage of the humble ‘dash’. The correct use of font is important to him so it's no surprise his first major internal task as Head of Design at Brightec was to research and implement a solution to improve font management across the team. And please, don’t be so bold as to risk using an italic around him… Although he’ll patiently, and kindly, explain why you are wrong. Nicknamed ‘Logocop’ for his pedantic use of font and punctuation at a previous job, it's lucky that James is just our type.

Beer is ale you need

Over a pint in 2016, James and his mates set themselves a home brew challenge to make a commercial beer. Having never done anything like it before, we’re told the result was ‘drinkable’. Armed with a drink that wasn’t unbearable, they established ‘He Brews’; a community beer group which teaches groups how to make and sell their own beer.

James takes his beer so seriously that he even worked one day a week at a local brewery to learn how to brew, whilst assisting the company with a redesign project. A self confessed beer snob, you’ll need to be careful what you’re holding when you meet this chap; he claims not to judge but simply finds it interesting why someone is drinking the particular beer they are; is it habit, loyalty, status? Or maybe, they just like the taste?!

A man of habit; James likes to start his day with a run (out of necessity to stay sane, as it's convenient), which is closely followed by a coffee — never instant, ‘it's a waste of my drinking time’ but by the afternoon he’s tyre-d and ready for a well-made cup of tea. We’re seeing a drink snobbery pattern emerging here, and wonder what judgements he makes during the Brightec tea round.

Don't use that tone with him

Clinging to the belief that beer makes him cool, if James had unlimited time, technology and money to build an app he would develop one to start a community of beer brewing groups and connect people with local breweries to support the increase of Micro-Breweries.

A fun fact to finish… James is allergic to squid. So it sounds like he’s pretty ink-compatitble.

Click here to read more about James and his work.